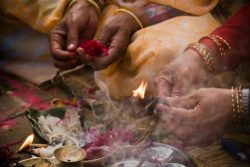 Why is worship so scary?  Why is a community at worship so threatening?  Why would someone come at a church, a synagogue, a mosque with a gun or suicide vest?

What could be more innocuous, feeble, non-threatening, than people on their knees in prayer with their hands upraised like prisoners of war?

Yet the scenes of the latest of mass murders by terrorists have happened in these places, among these gatherings, within the activities of prayer, song, and study.  Mother Emmanuel A.M.E. Church in Charleston; Tree of Life Synagogue in Pittsburgh; two Mosques in New Zealand, Al Noor (which means “light”) and Linwood in a city (would you believe it!) called Christchurch.  And since I wrote the first draft of this sermon, I heed to add Easter bombings in Catholic churches in Sri Lanka and Passover shootings in California.

Is there any sense to be made out of this senselessness?  I would ask you to consider, along with others who have studied closely these events, connecting the dots on the globe.  Ponder the thought, if you will, that these are not isolated events but rather, unpredictable assaults mounted from within a well-founded movement of racial and ethnic supremacy.  Consider for a moment that the internet which binds us together and is a source of an infinite amount of information is also the net which ties together white supremacists and Islamacists and anit-Semitists all over the world.  Consider as well that this same internet allows for these supremacists to operate without an identifiable leader so there is no head to target.  It simply grows and errupts by itself.

The Apostle Paul once described his first century situation this way: For our struggle is not against enemies of blood and flesh, but against the rulers, against the authorities, against the cosmic power of this present darkness, against the spiritual forces of evil in the heavenly places. (Ephesians 6:12) He was not talking about the internet, but he surely nailed how we live so vulnerable to a dark and threatening universe surrounding us.

We know that houses of worship are not the only places terrorists attack, but that’s the kind of place we are in right now.  I want us to wrestle with the question of why worship is so scary to supremacists that they attack to eliminate us.  So, let’s look at the readings for today with this question in mind of why worship drives supremacists into such a murderous rage.  You may be just as surprised as I was with the answer emerging from our texts.

Let’s start with our gospel lesson from John.  It is the familiar story of one of Jesus’ post-resurrection encounters with his disciples.  They have all gone on a fishing trip, perhaps to escape the traumas they have suffered under: the crucifixion of their Lord, their shameful abandoning of him, and his stupefying resurrection and return in gracious power.  Out on their charter boat all night they don’t catch a thing.  Then in the early morning light a figure barely seen on the shore asks them to do one more cast.

Their net fills with fish, and they drag it on shore.  There are all kinds of fish.  I can identify with that.  As a boy I used to go with my family and friends on trips to McFadden Beach between Sabine Pass and Port Bolivar to seine in the Gulf of Mexico for fish.  We would unroll 30 feet of a large net fitted with weighted sinkers on the bottom and walk out into the surf.  After making a sweep, we could bring the net to shore, and I would marvel at the variety of fish we had caught up: trout, mackerel, crabs, shrimp, flounder, snapper, octopus, perch, sting-rays.

Peter brings up the net to Jesus and dumps it out.  All kinds of fish.  The net was not broken.  Not a one got away.  In fact, somebody there had a counter and ticked off 153 different fish.  This has got to be a fish tale, doesn’t it?  Why would somebody want to remember that number?  One hundred and fifty-three different fish?

Well, let me tell you something I remember learning in seminary.  The Gospel of John is a very Jewish book.  It uses Jewish literary strategies and tricks to get its message across.  One of the fascinating tricks for a Jewish writer to use was the gematria.  What you needed for a gematria to work was to write out the letters of the Hebrew alphabet, aleph, beth, gimel and so forth, and assign a number to each of the letters.  Then you would write out a sentence or a phrase in Hebrew and under each letter put the number you had assigned it.  Next you would add up the numbers for a total sum.  And you would make that number part of your story.  It was like an embedded thumb drive of information.  The gematria was your memory stick.

So the challenge was to figure out what the 153 stood for, and it turns out that it stands for the sum of the letters in the Hebrew phrase “children of God.”  One hundred fifty-three different fish, not a one got away.  Children of God.  All brought to Jesus.  What a better image of the world outreach of the gospel could there be!

Now our second reading was the dramatic telling of Saul getting knocked off his horse and seeing a vision of the resurrected Jesus.  It turned him inside-out.  He was convinced on the basis of his Bible that Jesus was a fraud and that Christians were enemies of God.  His mission was to eradicate them, and he was good at it.  But when he got knocked to the ground, the one he had called a fake was now staring him in the face, and his glory blinded Saul.

Saul is that quintessential example of someone who was blind to the truth and had to be made physically blind, temporarily, to see the truth.  God called Saul to a specific mission.   God gave Saul a new name, Paul, and his orders were to move the church out of its narrow Jewish confines to embrace the non-Jewish world, the world of the Gentiles.  Gentiles—the people beyond the pale, the unclean, the strange, the other.  The story of the conversion of Saul to Paul illustrates that the change from seeing your world with your race as supreme into seeing your world as the universe is a wrenching, soul-shattering process.  It is a testimony to God’s powerful grace when this happens, given how deeply stuck we are in our beliefs of superiority.

Let us return to our question: Why is worship so scary?  For some time, the world in which we live could not have cared less about the church.  We are dismissed as a dwindling band of psalm-singers and do-gooders and hypocrites and nay-sayers.  What could be more innocuous and ineffective and puny than a Bible study at Mother Emmanuel or a Sabbath service at Tree of Life or Friday prayers at Al Noor Mosque or the First Communion of children in Sri Lanka?

However, somebody is seeing something in our worship, and it is scaring them to death! The third reading from Book of Revelation discloses exactly what is happening in Christian, Jewish and Muslim worship that is so scary. It is the earthly version of what is going on in heaven.  The Book of Revelation rips the earthly cover off what we do to reveal this: “Then I looked, and I heard the voice of many angels, the living creatures and the elders; they numbered myriads of myriads and thousands of thousands, singing with full voice, blessing and honor and glory and might forever and ever.  And the elders fell down and worshiped.”   The worship of the multitude in heaven, where no one is an “other”, shows up in the worship of church, synagogue and mosque.

Now, do you see why our worship is so scary to people who must for their very existence denigrate, demonize and dehumanize the other?  Those who travel on the dark side can see with frightening clarity in communities of faithful witness the destruction of every one of their fantasies of superiority.  Or, to put it differently, the world of the new heaven and new earth makes its beach-head landing right here in this sanctuary in our worship.  So show up Sunday after Sunday to sing our hearts out: Worthy is the Lamb that was slaughtered to receive power and wealth and wisdom and might and honor and glory and blessing!  It is an act of defiance as much as it is an act of adoration.  So we show up to go the distance, answer the bell, stand for justice, face into the fire, and fix your eyes on your hope to flourish in a new heaven and earth.

The pastor who wrote the Epistle of First Peter put down these words:   Beloved, do not be surprised at the fiery ordeal that is taking place among you to test you, as though something strange were happening to you. Why not be surprised?  Here’s the reason.  Those who travel on the dark side see with frightening clarity how communities of faithful worship point to the bright glory of what does on in the new heaven and new earth.   That determines the destruction of every one of their fantasies of superiority.  Their acts of wanton destruction and mayhem are a twisted and ugly admission that Lamb who was slain will turn out to be the one who judges them.  And we say with gentleness and not a trace of revenge that he is a judge who is ready and able to liberate everyone from obsession to their delusions through embracing everyone in the abundance of his love and forgiveness.

In the meantime, beloved, do not be surprised, but be faithful in your worship.