"The Cross Leaves its Mark on All of Us"
By Rev. Dr. Fritz Ritsch 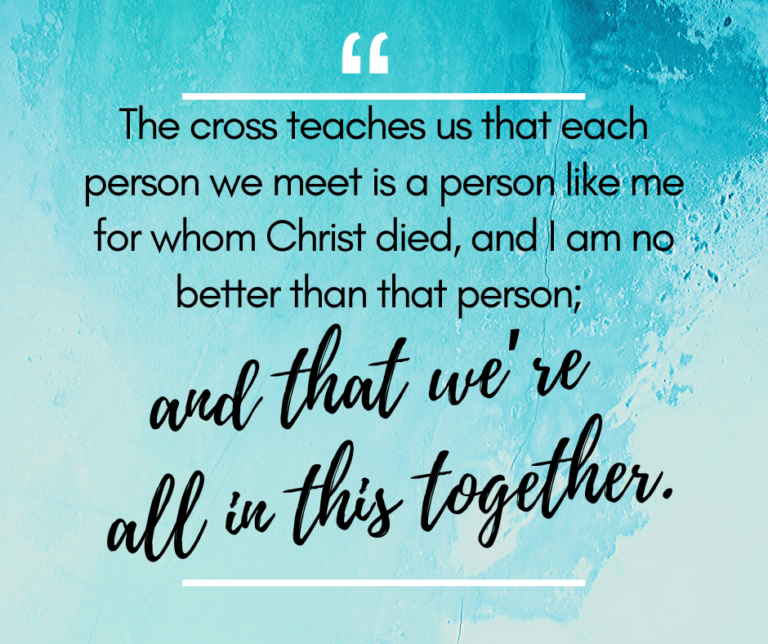 There was a time when Western Civilization lived under a cloud. In the Medieval period, the Western World was beset by poverty, disease including the Black Death which wiped out a third of Europe, a class system in which the vast majority of people were poor serfs laboring hard for an handful of rich lords and for a church brimming with riches that it did not share. Superstition ruled the day and it was believed that the devil and his minions lurked around every corner, and with good reason: because life was hell. Pieter Huys and Hieronymous Bosch painted grim elaborate hellscapes depicting an afterlife of torture and suffering for unbelievers. The only relief that the average Westerner could imagine was the relief of death after her average lifespan of forty years. After death, one could go to heaven. Until then, life was, as Thomas Hobbes once wrote, “nasty, brutish, and short.”

For people living in those grim days a ceremony like Ash Wednesday carried a message that really hit home for them. Ash Wednesday begins the season of Lent, a period of time during which we Christians are called to reflect on Jesus’ own suffering and death and to meditate on human mortality and our own sinfulness. For Medieval people, who imagined that their plight was what we called in seminary DER, or Divine Earthly Retribution, the problem of sin and suffering and the awareness of death were always real weights upon their lives. They did not want to die in their sins, because the only hope they could see was in the afterlife. And so Ash Wednesday, and its grim reminders, had an important place in their lives, reminding them at once of their plight and their hope.

Fast forward to the United States of today. The Dark Ages are long gone, wiped out by the onset of scientific thinking, which caused humanity to stop thinking of death and disease and social ills as inevitable curses sent by God and to view them instead of problems to be solved. With such thinking came progress—rapid progress especially compared to the centuries of darkness that proceeded it. With that rapid progress has come a very different way of thinking about being human. We no longer view death as our constant companion. In fact, we’ve swung the opposite direction—we work to avoid it or any mention of it as much as possible. We don’t view human sinfulness as the cause of all of life’s miseries. In fact, we think that human ingenuity is the cause of all the good things in life.

As to God, we’ve gotten away from God who judges and condemns, which is a good thing. Instead now we think of God as almost so sweet and kind as to be insipid. I’m not always sure that’s much better.

So for us, seasons like Lent and days like Ash Wednesday with its grim message “You are dust, and to dust shall you return” feel like vestiges of a past best left forgotten. A season to reflect on human sinfulness and on our mortality seems like a morbid interruption in our lives. And we hate these morbid interruptions, those times when life reminds us about death or when the news reminds us of human sinfulness. Right now we’re all worried about the Covid-19 epidemic; even the possibility of a new flu-type illness has caused the stock market to drop 5%. When we hear about the suffering of civilians in Idlib Province thanks to Syria’s war with its own people, we change the channel. We hate to have reminders of human sinfulness and mortality invade our comfortable worlds.

Which is why God interrupts our lives with Ash Wednesday.

The myth of human progress lulls us into believing that humanity as a whole is getting better and better. Death and suffering and human sinfulness are being defeated, or so we think. But really, that’s not true. It is true that the world is a far better place than it once was. But before that, lest we forget, the world was not so bad a place either. During the first two centuries of the common era, the first and second centuries AD, Rome was at its height, and it was the greatest civilization ever known. There were no heights that Rome could not climb.

And it was in that period of human achievement that God took human form in Jesus Christ, lived among us as one of the poor and oppressed, and was arrested, tortured and executed by the powers that be. Jesus’ life reminds us that human progress and achievement has victims. It reminds us that progress can be amoral and can put institutions and authority before human beings. And Jesus’ life and teachings remind us that when we think we are all powerful, we forget some important things. Like mortality, which is the most evident proof of human fallibility. And God, who is immortal and all-powerful and holds us accountable and does, as Pope Francis likes to say, have a preferential option for the poor.

Ash Wednesday wants the cross of Christ to leave a mark on us. It reminds us of our limitations and of the overreach of human power. And it reminds us of the cost of our attachment to progress—that it means that other people suffer.

And it reminds us that what God needed to do to correct human overreach was extreme. God had to take the problem on personally in the form of Jesus. God had to die. And then God had to rise on Easter morning to save us. The cross of Christ has left a mark on us all—the mark of the wounds of Christ. We bear his stigmata. It calls us to remember that we were bought with a price, that has Dietrich Bonhoeffer taught, God’s grace given us was costly because it cost the life of Jesus Christ. Sometimes when life is good and we believe that humans can do anything, we need to have that awareness, that awareness of the cost—of the cross of Jesus Christ. It makes us humble. It makes us think twice. It reminds us that there is a way that Christ taught us to be in the world, and he died for it. And we, who bear his name, also bear the marks of that cross, and we can’t forget those vital, important lessons about loving enemies, about forgiving and healing and reconciling, about courage in the face of societal pressure, about giving one’s self for the sake of others.

And so the cross of Christ leaves its mark on us all, and it should. It reminds us that progress must never deny the dignity and holiness of being human—being human is dignified and holy because Jesus was human. And it reminds us that we are finite, and that we are as individuals and as a society accountable to the infinite—we are accountable to God.