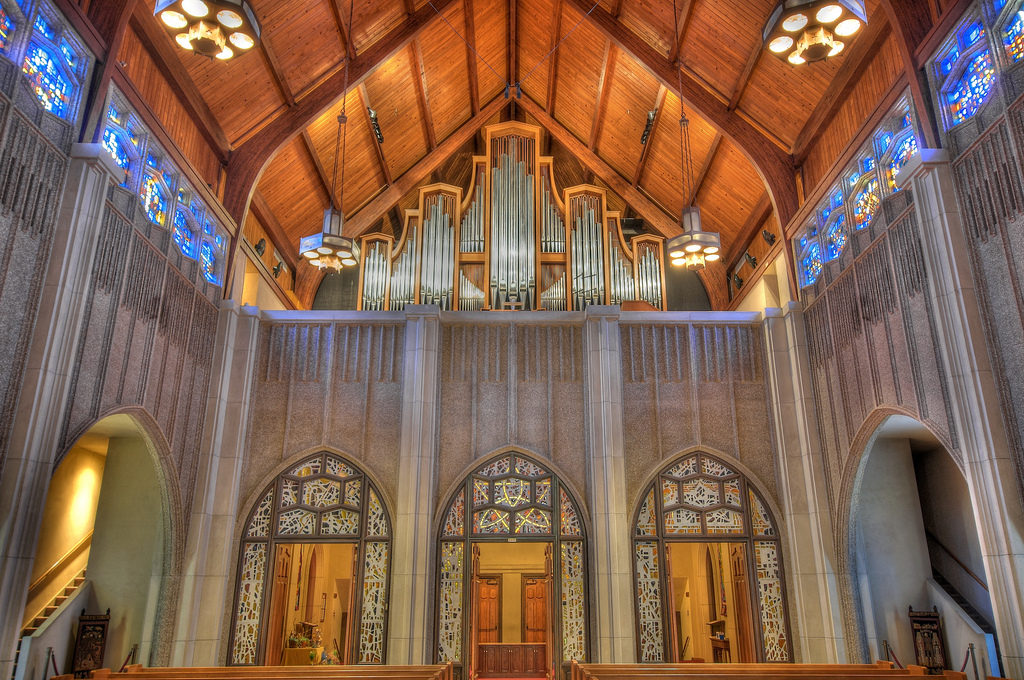 St. Stephen Presbyterian Church organized in 1884 was originally located South of downtown Fort Worth and in 1950 moved to its present location near the campus of Texas Christian University. The Sanctuary was completed in 1969 and occupies a commanding position atop a high rocky escarpment with a magnificent view of downtown Fort Worth. It is of modified Gothic design and cruciform in shape. Outside a massive center tower rises 150 feet above the surrounding landscape while inside this the same tower rises 100 feet above the floor of the crossing. The interior of the Sanctuary is 260 feet in length and 130 feet wide at the transepts. The organ and choir are in the Gallery at the rear of the Nave approximately 30’ above the center aisle.

In 1971 an instrument of approximately 60 ranks built by M. P. Moller of Hagerstown, Maryland and was installed in the Gallery behind the choir. The pipework for this organ was under scaled for the size of the Sanctuary and was difficult to register for weekly services at St. Stephen. In addition, much of the zinc used in the construction of the larger pipes was too thin and pipework began to fail. As early as 1975 some of the pipework was replaced by Moller. The ensuing years brought rapid deterioration of many of the larger metal pipes as well as mounting mechanical problems which rendered portions of the instrument unusable. The design of the upper portions of the instrument was poor causing maintenance difficult and in some areas impossible.

Tonal improvements and replacements include a complete new generously scaled Great Principal chorus, new Mixtures in all divisions, many new chorus and ensemble reeds, and major rescaling and relocating of existing pipework. The original Great Principal chorus is now in the Swell, rescaled. The original Swell chorus is in the Choir. The Swell reed chorus is new with English shallots including an Orchestral Oboe. The original Swell strings were rescaled and moved to the Choir, the Swell strings were replaced with new pipework. All of the flutes and mutations in the Swell were rescaled and revoiced. We had in our possession the 8’ Clarinet from the original organ installed in the church near downtown. This was revoiced and placed in the Choir division. The 1971 Moller 32’ Pedal Bombarde (half length) was moved to the expressive Bombarde division as the 16’ reed . It also plays in the Pedal at 32’. A new full length 32’ and 16’ Contra Ophecleide joined the Pedal division. 32’ CCCC is 14” in diameter and plays on 14” wind pressure. A new English 8’ Hooded Tuba was added in the expressive Choir division. This powerful stop plays on 20” wind pressure. Low CC is 8” in diameter with the pipework becomes harmonic at C13.

The Moller Trumpet en Chamade originally located in the facade was placed high in the interior or the instrument and revoiced with English shallots. A large scale Estey 16’ Open Wood was added to the Pedal. There was not adequate space for this in the main organ design so it is installed horizontally above the Great division speaking up directly behind the facade. It provides a ceiling for the unenclosed Great as well as a platform from which to service the tall facade pipes. The original Trumpet en Chamade is installed directly above the Open Wood.

A new French Horn and large scale 8’ Diapason was added to the Bombarde division. As an example of the small scales the Great 8’ Bourdon was increased in scale by 12 pipes. The original Swell 8’ Trompette is now the Great chorus reed.

This instrument also has a Chancel division at the opposite end of the building some 200 feet from the Gallery organ. It is a small division consisting of a Principal chorus including a Mixture, a large scale French Trumpet, and a 16’ Pedal Principal. Although small in size it plays on 6” wind pressure and is extremely useful for congregational singing.

The Moller electro-mechanical and electro-pneumatic relay systems were replaced with diode-matrix solid state systems. The original remote combination action was also replaced with a new multi-level solid state system. At the time this project was completed there was not a quality electric drawknob unit that would fit into the tight Moller drawknob layout. Therefore, the drawnobs are activated by the Moller electro-pneumatic system. A new electric coupler rail was installed with both the normal couplers but also the division sub, super, and unison off. This gained much needed drawknobs for additions.

This is an important instrument for the Fort Worth musical community. Theologically and musically the weekly services at St. Stephen are extraordinary. The English tradition of exceptional worship is abundant. In addition to Sunday worship many other exceptional musical events are heard throughout the year.