History of the Organ

In 1971 an organ built by M. P. Möller, Inc., was installed in the recently completed sanctuary. Soon after the installation, problems began appearing with both the pipes and the action of the organ. The zinc pipes were of an inferior quality and large numbers of them began bending, necessitating the replacement of some pipes by the Möller Company as early as 1975.

The ensuing years brought rapid deterioration of many of the larger metal pipes as well as mounting mechanical problems which rendered portions of the instrument unusable by 1988. In addition, the superstructure was poorly designed making maintenance of the upper portions of the organ dangerous or completely impossible.

Early in 1989 the crisis was such that action had to be taken, and the Session ordered the formation of an organ committee to investigate what options were available. It was also decided to seek the advice of an organ consultant to assist in this evaluation.

The organ committee determined very quickly that the needed renovations could not be done in stages since each stage would necessitate the removal of part of the previous stage’s work, increasing the cost three or four times.

In February of 1991 after hearing the report and recommendations of the Organ Committee, the Session unanimously approved the signing of a contract with Garland Pipe Organs, Inc. of Fort Worth, Texas, to renovate, restore, and rebuild the organ.

Garland Pipe Organs, Inc. was chosen for excellence in craftsmanship, reliability of service as well as the beauty of sound produced by organs built by the Garland firm. Dan Garland, owner and tonal director, proved to be congenial, businesslike, as well as sympathetic to the unique needs of this congregation.

Most of the old organ was removed following Easter, 1993 with completion of the project in December, 1993.

The organ now has a much broader sound with many 8′ ranks providing a smoother ensemble. The pedal organ has been enhanced by the addition of a 16′ Open Wood, a new 16′ Principal, as well as full-length 16′ and 32′ reeds. New pipework including reeds and flues was manufactured by A. R. Schopp’s Sons, Inc., of Alliance, Ohio. Fred Oyster of the Schopp firm was responsible for all reed voicing. All mixtures were replaced with smaller scaled pipework to give a more cohesive, less-strident sound. 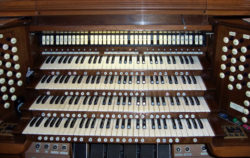 The organ includes a Clarinet that was originally part of the 1916 pipe organ installed at the old downtown Broadway Presbyterian Church (St. Stephen Presbyterian Church’s original name). The Clarinet remained in storage for many years, and was placed back in the organ as part of the 1993 renovation. A wooden Doppelflöte, and a large-scale Open Flute have been included in the rebuilt organ. Most of the flues in the organ have been rescaled and all Möller pipework has been rescaled and revoiced. A new Tuba Mirabilis and revoiced Trompette en Chamade complete the ensemble.

The console was completely rebuilt and the combination action assembly replaced by a Solid State Logic, Inc., multi-level memory system. There now is a programmable full organ and crescendo.

In order to meet a tight production schedule the exterior case components were contracted to the Redman Organ Company of Fort Worth. The windchests and vertical pipe support structure within the facade were designed and built in the Garland Shop. The oak case was designed by Frank Friemel. It adds beauty and stability, helping to focus the sound of the ensemble.

This instrument is housed in an ideal sanctuary building situated just blocks from Texas Christian University. Hard surfaces have been used to ensure a favorable acoustical environment resulting in a reverberation time of almost 4 seconds. The sanctuary is of modified Gothic design and cruciform in shape.  The nave is 200’ feet in length and the crossing is 150’  across with a massive battlement style tower at the crossing which rises an impressive 150’ above the surrounding landscape.  The building and appointments are reflective of the High-Church form of worship favored by this congregation.