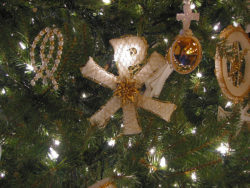 Since the late 1970s, the sanctuary of SSPC has been adorned with special ornamentation for the Christian season of Advent through Epiphany. Decorating the season’s symbols of wreaths and Christmas trees, our members have continued the tradition of making symbolic ornaments in the form of Chrismons (a blended word, or portmanteau, combining Christ and monogram.)

Chrismons were created in 1957 by Frances Spencer as a way to decorate the Christmas tree in her sanctuary at Ascension Lutheran Church in Danville, Virginia. Members of our church began making these about fifteen years later.

These ornaments are particularly appropriate for the sanctuary: they are familiar symbols of Christian crosses, Greek letters, fish, circles, triangles, stars, roses, crowns, and parable balls. Originally cut from white Styrofoam, our Chrismons today were made by Mary Lou Wright, Charlotte Hudgins and Barbara Pierce by shaping wire and beads into the symbolic ornaments. White is the liturgical color for Christmas, symbolizing that Jesus was pure and perfect. Gold symbolizes his Majesty and Glory. Mary Lou Wright, St. Stephen communicant and member of our chancel choir since 1974, maintains these.

Our two Chrismon trees (two symbolizing Jesus Christ: Truly Human and Truly Divine; John 1;14) originally stood in the Narthex. Today these two nine foot trees are placed in the crossing by the baptismal font and the pulpit, flanking the three steps (representing our Triune God) leading to the Chancel. Their lights are turned on Christmas Eve, symbolizing Jesus Christ as the Light of the World (John 8:12). We also have two twelve foot trees adorned with white lights on either side of the retable.

If you wish to read information on each of these symbols and crosses, a flier has been copied with this information. You may pick up a copy on violet paper in the Narthex.