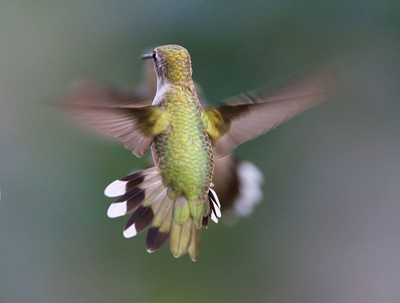 My office desk faces a set of french windows that look out onto St. Stephen’s lush back yard meditative garden. Recently the bushes in front of my window have developed small white blossoms, drawing bees, bird, butterflies, and hummingbirds. The hummingbirds flit from flower to flower at lightening speed, and often hover face forward at my window, allowing me to look at them in far more detail than they’d ever allow if I was outside with them. They’re simply amazing.

I love the humongous hummingbirds I see in the Southwest, in Texas and in New Mexico, where I often vacation at Ghost Ranch, a Presbyterian retreat center. I grew up in South Carolina, where I also saw a lot of hummingbirds, but they were so small–about the size of bees–that for years I assumed they were insects. These large hummingbirds seem almost miraculous to me. They seem simply too bulky to be aerodynamic, and yet their speed often defies my ability to watch them.

The Hopi Indians, one of the tribes that was settled in the Piedra Lumbre region where Ghost Ranch is located, have a legend about how a hummingbird averted a famine. At one time, a village was in such a drought that the tribe decided to move. By accident, they left two children behind. The children made a toy hummingbird who became real, and found the children food. Then it sought out the god of nature, Muiyinwuh, and demanded to know why he had forgotten to take care of the needs of the human tribe. Chastened, Muiyinwuh travelled to earth and ended the drought. In the meantime, the hummingbird found the children’s parents and united them and the tribe with the children.

The hummingbird played the role of mediator between the Deity and humanity–something we Christians can relate to, since we view Jesus as the mediator between God and humanity. Jesus is the perfect amalgamation of human being and God, the living bridge between this world and the next, proof that God doesn’t forget us or forsake us, and that heaven and earth are not alien to one another.

With that Hopi legend in mind, I can look at the hummingbird in my window, red and green wings whirring blurs, and see a living symbol that the barrier between heaven and earth, between me and God, isn’t a barrier at all, but blurred, fast-moving veil, present in this world and the world beyond all at once, and taking the form of flesh and blood and wonder and beauty, whether in a hummingbird, or my fellow human being, or in God made human in Christ Jesus.