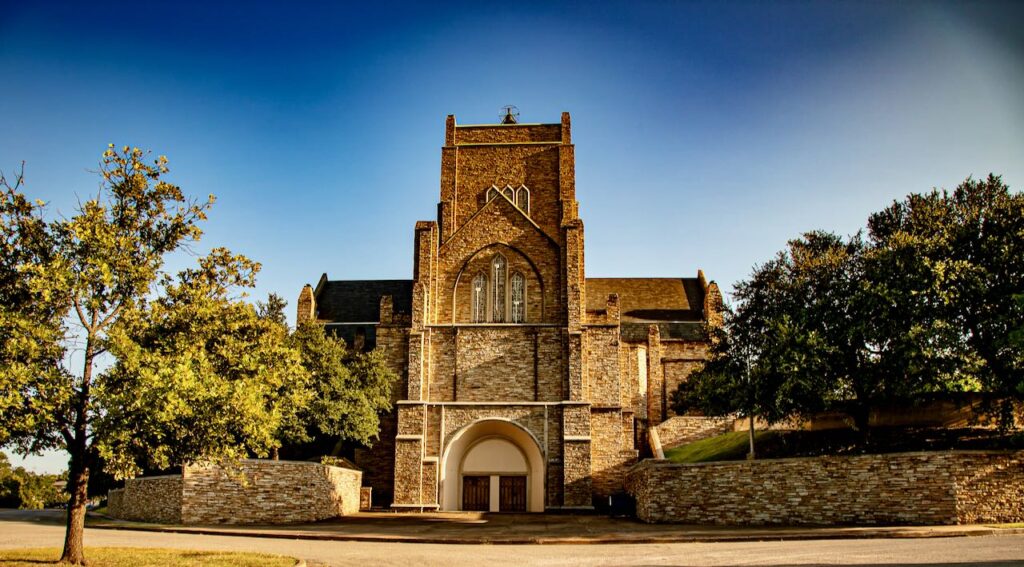 St. Stephen today is the germination of seed planted over 130 years ago in Southside Fort Worth.

Its first sanctuary was completed in 1900. Unfortunately, that church and several others were destroyed in the 1909 Southside Fire. Broadway rebuilt in 1911, choosing to go with gothic style architecture; but the Southside never recovered from the fire, and the neighborhood’s decline placed Broadway in a difficult position.

In the late ’30s and early ’40s, the session (governing council) of the church began to dream of building a tremendous gothic cathedral-style building. They acquired property on a hill near TCU, where it looked like the city was expanding. In 1950, under the leadership of new pastor the Rev. R. W. “Bill” Jablonowski, Broadway’s congregation moved to the present site and changed its name to St. Stephen Presbyterian Church. By naming the congregation after the first “deacon,” or servant-leader, St. Stephen established that its mission was to serve the community in the name of Jesus Christ.

St. Stephen’s earliest sanctuary is what is now our Parish Hall. It took nearly three decades, several contractors, and three capital campaigns to complete the “Southwestern Basilica” in which we worship today.

The Rev. Jablonowski established a tradition of intellectually challenging sermons, high worship, musical excellence, and community engagement that remain hallmarks of St. Stephen’s ministry to this day. In Rev. Jablonowski’s 39 year ministry, he and St. Stephen made many important community contributions, but perhaps most notable is that the Presbyterian Night Shelter of Fort Worth was his idea. Early one winter morning in 1983, “Bill Jab,” as he was known, pounded on the door of First Presbyterian and was greeted by its pastor, the Rev. Bob Bohl. Bill Jab waved a newspaper in his face and pointed to a story about a homeless man freezing to death the night before. “No one will ever die of exposure in my town again!” Rev. Jablonowski is reported to have said.

Within a week, Rev. Bohl had acquired several million dollars in contributions, and he, Rev. Jablonowski, and Rev. Dr. Warner Bailey of Ridglea Presbyterian (now St. Stephen’s parish associate), led teams of congregants to open the earliest incarnation of what is now the most important homelessness provider in Tarrant County.

St. Stephen continues that tradition of community service. In 2007, St. Stephen, along with Broadway Baptist, co-founded the Room In the Inn ministry in Tarrant County, in which nearly twenty local churches welcome the homeless into their buildings during the hottest and coldest months of the year. Dr. Ritsch, the present pastor, is the chairman of the Tarrant County Homeless Coalition, and both he and Rev. Dr. Bailey, our parish associate (and co-founder of the Night Shelter), serve on the board of the Presbyterian Night Shelter.