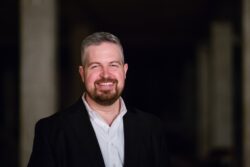 As a solo recitalist and collaborator, Jordan has performed in venues such as St. Patrick’s Cathedral (New York), and various cathedrals in the United Kingdom, including Gloucester, Chichester, St. Albans, and Bristol. Additionally, Jordan has performed at the Meyerson Symphony Center (Dallas) with the acclaimed Dallas Winds where he collaborated regularly along with performing on their latest album: Asphalt Cocktail: The Music of John Mackey. In 2019, Jordan performed at the Organ Historical Society National Convention.

Jordan has served in many capacities within the greater Dallas musical community. He was Sub-Dean of the Dallas Chapter of the American Guild of Organists for two years. As a board member of the Greater Dallas Handbell Association, Jordan was a workshop clinician and coordinator. He was also active in the Dallas Symphony Chorus for five years.

In his spare time, Jordan enjoys teaching piano and organ, checking out new restaurants with friends, traveling, and walks with his dog, Toby.