Room in the Inn

St. Stephen’s outreach to the homeless, in which we welcome homeless men into our Parish Hall once a week during the hottest and coldest months of the year, is in it’s tenth season.
Room in the Inn is a ministry that makes sure that some homeless folks in Fort Worth have a warm, comfortable place to eat, sleep, fellowship, and feel human during the hottest and coldest months of the year. St. Stephen, along with over twenty other local churches, welcomes up to 15 homeless men to be served a sit-down dinner and breakfast, sleep in a comfortable bed, and fellowship with church members, playing games, watching movies, and talking about life. We meet every Tuesday night in December, January, and February, from about 5 pm to 7 am Wednesday morning.

Volunteers are always welcome! There are a number of jobs that volunteers can do; you can find out more by contacting Mike Tyson at mike_tyson@sbcglobal.net. You can volunteer by following this link: http://www.signupgenius.com/go/60b0b44a9ae28a57-room41

Note that the link doesn’t take you to the exact date you may wish to sign up, but you can find tabs for the various days we have RITI.

We have nine sessional committees and numerous sub-committees, guilds, and teams carrying out various aspects of St. Stephen’s mission. You may not know everything the church is doing or you may be looking for some new way to serve the Lord. If either or both those things are true, then come to the Parish Hall in the Education Building on Sunday, January 22, at 9:15 am and 12:15 pm. The theme is “Growing by Grace by Serving Others.” There will be booths, displays, representatives, and sign-up sheets for all the various activities of the church. This event has been organized by the Leadership Team, which was formed in response to the Strategic Plan’s focus on leadership in the church. 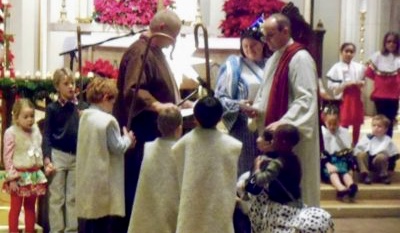 Local churches praying for peace in a divisive time

FORT WORTH – Cable news would be revving up. The talking heads would be dissecting early voting results, and campaign surrogates would be preparing to spin the news.

The very thought exhausted Anne Bourland, who instead came to St. Stephen Presbyterian Church on Tuesday night to pray and be with fellow parishioners.

“I came here out of concern for our nation,” Bourland said. “This has been a very difficult election. We have been bombarded with so much negativity.”

St. Stephen, which began its prayer service after the polls closed at 7 p.m., was among several places of worship this week that invited both members and strangers to pray, meditate, receive communion and seek guidance near the end of a particularly divisive election.

Trinity Episcopal Church in Fort Worth offered a noonday prayer for the nation and its leaders. University Christian Church remained open Tuesday for open prayer, meditation and communion.

“We felt this is an important time to pray for the nation,” said Tom Plumbley, senior minister at First Christian Church. “We have been looking at our candidates to see who is taking the high road and who is taking the low road. We wanted to remind ourselves that we, too, have a responsibility to take the high road. We should behave in a way that reflects the goodness and glory of God.”

At St. Stephen, about 20 members sang God of Our Life and prayed for reconciliation. The Rev. Fritz Ritsch reminded those in attendance that Christians, Muslims and Jewish people worship one God.

“We are sisters and brothers,” Ritsch said. “May enemies being to speak and listen to one another. … May we empower all people in our nation to live by the law of love.”

Bourland, who married her husband at St. Stephen 52 years ago, said this church provides a place of rest of solace, even in the most tumultuous times.

“This is a very special place,” she said. “I am reminded here that God is in control.”

Room at the Inn

During the hottest and coldest months of the year, St. Stephen opens its doors the homeless in our community every Tuesday night and Wednesday morning. Through our partnership with the Day Resource Center for the Homeless, up to 15 men are transported to Parish Hall where we provide an air-conditioned (or heated in the winter) space for them to enjoy a restful evening, including two warm meals– and especially warm hospitality among St. Stephen members and friends.

Visit our Serve page to volunteer!

Mitchell Crawford and Beth Fultz you to return to Children’s Choir on a new night.

Serving Ages Pre-K – 5th Grade. Optional actvites for those not wishing to play percussion or chimes will be led by Beth Fultz. 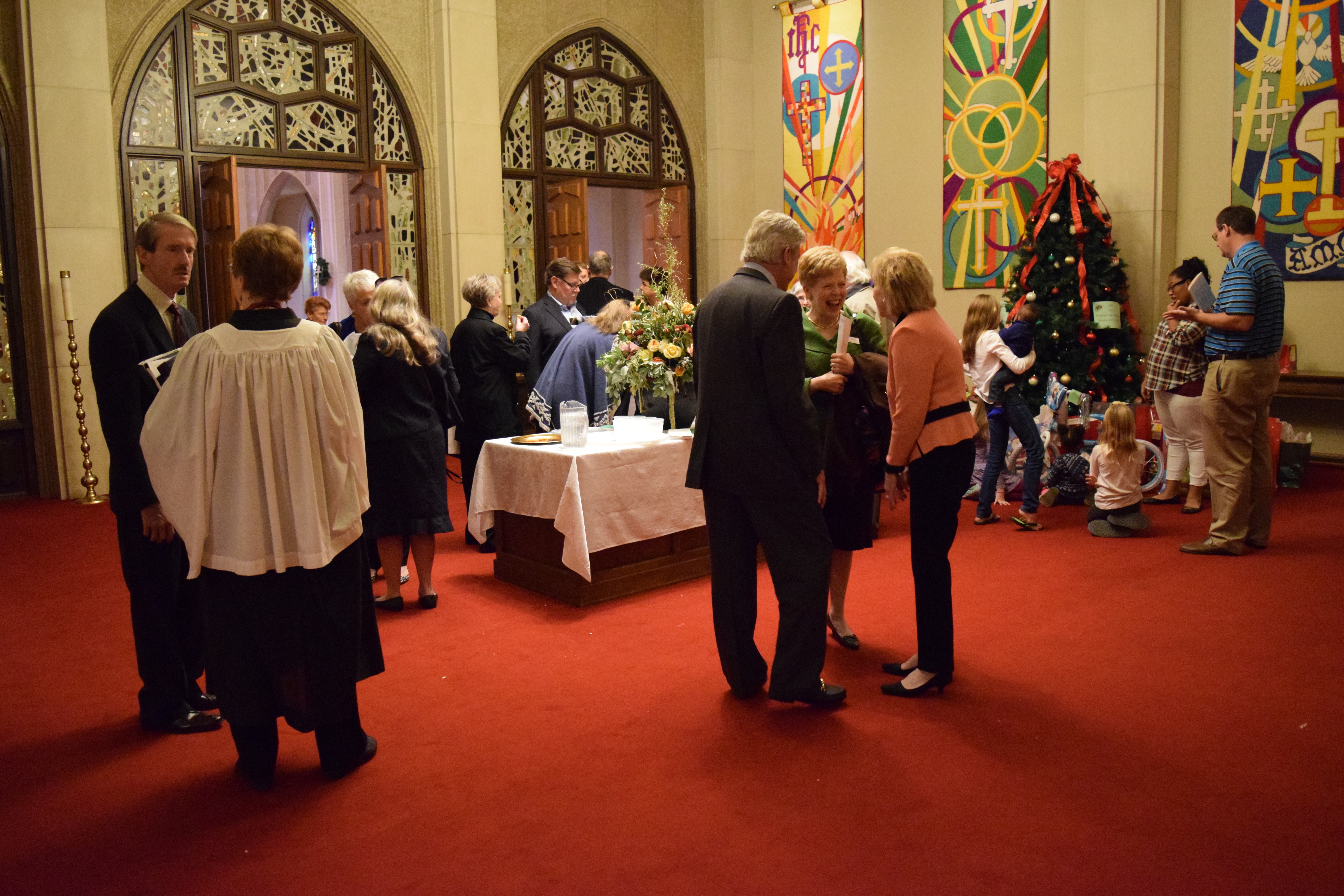 This year on November 6th, St. Stephen will commemorate its faithful departed at our annual service of remembrance. Services like these are held in Christian churches of varied denominations all around the world, typically occurring around the feast of All Saints, at the beginning of November. Halloween is indelibly linked to this feast, as its original monicker – All Hallows’ Eve – attests. In addition to the annual reading of the church necrology, the choir will this year present within the typical framework of the service Gabriel Fauré’s poignant Requiem in a “chamber” version for organ, harp, violin, and cello. I am excited by this for a number of reasons, but none more than the opportunity it affords us to experience a work most generally known through concerts and recordings in its original, liturgical, setting. Fauré composed the Requiem while the Master of Choirs at the Parisian Church of The Madeline – where, incidentally, the great virtuoso and composer Camille Saint-Saens was organist. In its earliest version, the work is very much on a small, “church service” scale, and Fauré was to considerably alter, expand, and orchestrate it over the decade which followed. Regardless of the version (which is somewhat remarkable, considering the grandeur of the version for full orchestra), the piece is imbued with a gentle quality not conventional for the time, but emulated by later disciples (most notably in the unsurpassable Requiem of 20th century organist and composer Maurice Duruflé). It will be a truly special service, and I commend it to you. Please do not miss this special day in the life of St. Stephen!

Post-Election Prayer Service of Healing and Hope For Our Nation

St. Stephen invites you to join us after the polls close at 7 pm,  November 8, for a thirty minute service of meditation, prayers and music in our main sanctuary. We will thank God for the gift of citizenship and express our confidence that our nation’s future is in God’s hands; and we will pray for reconciliation and the welfare of this nation we cherish.  We hope that you will join us.

The United Nations has declared every December 1 as an international observance of World AIDS Day, to increase public awareness and action around this deadly disease. Last year, a consortium of local congregations and faith leaders hosted the first World AIDS Day service at Broadway Baptist Church. This year’s service will be at St. Stephen Presbyterian Church. The service will offer inspiring music and St. Stephen’s outstanding choir, led by Organist and Director of Music Ministries Mitchell Crawford. Our guest speaker will be Dr. Cheryl McDonald, a local physician who specialized in infectious diseases and is the current President of the Board of Directors at the AIDS Outreach Center.

Participating faith representatives include Broadway Baptist, Brite Divinity School, and several congregations representing many denominations. This year we are partnering with RESULTS (www.results.org), a bipartisan advocacy organization that has been combating the effects of global poverty for over 35 years.